A Scots fantasia about anxiety

Raik is a twine game, built in a platform for hypertext story-games. It's written in Scots, one of the languages of Scotland, with a full integrated translation into English. An earlier version was entered into the 2014 Interactive Fiction competition: this is a full expanded edition, twice the size, with additional features and more bad jokes about celtic fantasy and Scottish independence.

Average playtime: 25 minutes for a full playthrough, 90 minutes to read everything on multiple playthroughs.


Direct any thoughts, questions or bugs to aitch@harrygiles.org.

This game took me quite a long time to write! I also make a living from my art: I don't have another job. And I'm really proud of it and want it to be valued. But I also know that the market value of any given piece of digital art is effectively zero, and that many of the folk who might want to play this aren't earning much money either, and that most of the economic options available to us aren't particularly palatable, and that I want you to play this more than I want to get paid. So here's my suggestion.

Alternatively, support me on Patreon from a buck a month and get access to all the work I make for no extra charge. 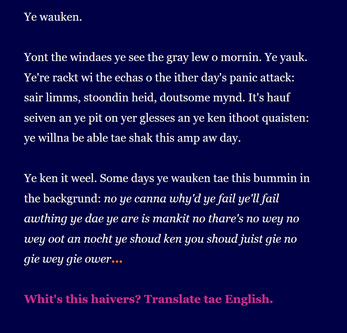 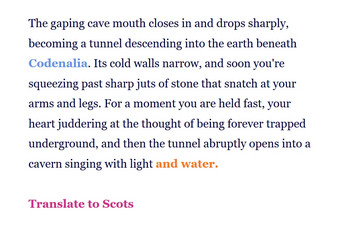